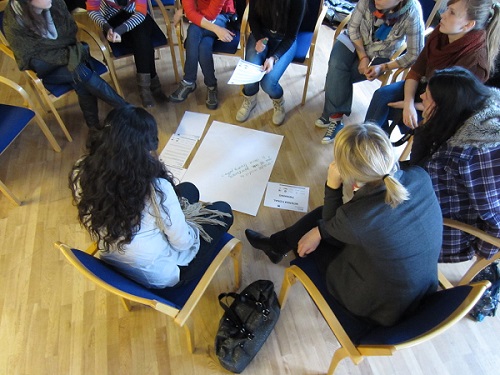 “Now the Citizens!” was a campaign run in the runup to the 2019 European Parliamentary elections by Democracy International, Meer Democratie Netherlands, Mehr Demokratie Germany, Meer Democratie Belgium, Mehr Demokratie Austria and Omnibus für Direkte Demokratie. This campaign received support from the European Cultural Foundation as it is rethinking Europe as an open and democratic space.

2. What do you want to achieve?

3. Why do you want a citizen-led democratic reform of the European Union?

The European Union can only survive and be a source of peace, justice and prosperity on our planet if citizens take full ownership of it. Citizens can only develop this sense of ownership if they are given a hand and a say in shaping the future of the European project. Citizen participation cannot remain limited to specific policy areas, but must concern the very democratic structure and functioning of the European Union, as this provides the foundation and operational framework for all other political activities of and within the European Union.

4. Why do you address candidate Members of the European Parliament?

The European Union is at a critical juncture in its historical development, undergoing a fundamental transformation as a result of the various crises that it has been facing over the last decade. The European elections of 2019 - and the European Parliament, the European Commission and other top EU functions that are newly filled and installed in response - are of decisive importance for the way the EU will come out of this transformative process.

6. Why do you call for randomly-selected citizens’ assemblies?

If citizens are to take ownership of the European Union, it is of crucial importance that they are involved in its democratic reform from the very start. Citizens should have the capacity to set the democratic reform agenda of the EU institutions, rather than the other way around. Independently organised citizens’ assemblies, composed of randomly selected citizens and supported by expert input, are the only possible way for politicians to receive concrete, well-informed and unbiased political recommendations from citizens.

7. How do you want to have randomly-selected citizens’ assemblies organized?

8. How do you want citizens’ assemblies to be followed upon?

The organisation of citizens’ assemblies is only a first step in the democratic reform of the EU. In order for this process to have credibility and for citizens to feel taken seriously, citizens’ recommendations need to be promptly and publicly discussed and responded to by all relevant political actors, including by means of a debate and vote in the plenary of the European Parliament. The Europe-wide debate should be followed by concrete legislative proposals for democratic reform, including, if deemed necessary, a proposal for Treaty change involving a new European Convention (Article 48 TEU).  In order to ensure broad support among the population, citizens should be given the final say on the outcome of a possible new Convention by means of an EU-wide referendum or simultaneous referendums in all EU Member States.

9. Why do you call for an intergroup on the future of European democracy?

A citizen-led democratic reform of the European Union is not accomplished overnight. It will require a step-by-step approach and the active involvement and support of all EU institutions and civil society. While European Parliament intergroups have no formal competences, they allow for ‘coalitions of the willing’ to emerge around specific themes, connecting interested and committed Members of the European Parliament with relevant stakeholders. An intergroup on the future of European democracy could take the lead in designing a roadmap for the democratic reform of the European Union, exploring the above-mentioned proposals in detail in close collaboration with relevant experts and civil society stakeholders. The roadmap should be adopted by the European Parliament as a whole, and be forwarded to the other EU institutions for further dialogue and implementation.

Core organisations in the "Now the Citizens!" campaign:

Your donations are welcome!